A 5% pay rise versus double-digit inflation…what is best for your pension?

Less than 2 years in the TPS?

A question to which there are as many answers as their pensioners….and no-one has convinced my one way or the other…so I opened another spreadsheet.

The sheet I used: https://bit.ly/3PzqC9e

Ok, so this is a bit of self-indulgent navel gazing where I intend to reflect on campaigns and other stuff that I feel might have made a difference.

The Pay Freeze pension implications. Back in 2020 I became aware of the implications for pensions of the rule used to calculate the final salary that only re-valued salaries from the date of a change in pay. The briefing document was taken up by the main unions and has been discussed at the DFE and the Pension Board. Many authorities are now taking action to ensure teachers do not lose out twice during pay freezes.

Case studies published on the TPS website were misleading and had significant mathematical errors that over benefitted the newer Career average scheme. Challenges to these through the TPS facebook page led to the case studies being withdrawn and re-worked with *slightly* better scenarios – though still with scenarios that unduly flattered the career average option (teachers in the NPA60 scheme working until 65 etc).

The TPS website has many useful calculators but one in particular caused me major concern. The career average calculator included assumptions on future inflation and factored those into the results. Using inflation itself wasn’t a problem but the resulting ‘pension’ then lacked any context. I pointed out, repeatedly, that it was no good being told that you’d be getting a pension in 40 years time of £110,000 a year if you didn’t know how much a loaf of bread was going to cost in 40 years time. The calculator has had the inflation element removed.

With over a decade of below inflation pay rises and the ending of the final salary scheme there has never been a better time for teachers to be made aware of how the rules can work in their favour. In particular the hypothetical calculation can now be used much more sympathetically. The main successes in this area has been where I’ve worked through the figures with teachers desperate to leave who didn’t realise that breaks they’d had back many moons ago would result in their pensions being significantly (up to 24%) higher than was being shown on their statements.

Is your final salary pension about to fall over a cliff and lose some of its value?

The scheme end on 31 March 2022 but continues to use salaries from the last 10 years and those into the future. Your pension can go down if you are not careful 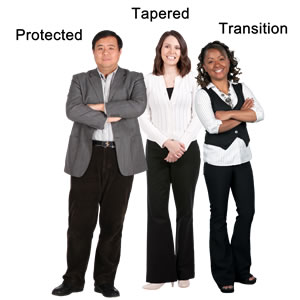 The remedy period (1 April 2015 to 31 March 2022) is where each eligible teacher gets to choose which scheme it is counted in, either their original final salary scheme or the new career average scheme.

TPS produced some case studies that, in my opinion, appeared to have been designed with the intention to promote the new career average scheme and minimise the differences between the schemes rather than what should have been their primary purpose; to help members of the scheme identify with the examples and so improve their understanding of what is likely to happen to their pensions.

To this end I have created several case studies of my own that, again in my opinion, more closely resemble real cases. The first 3 of these are all based on a typical classroom teacher who reaches the top of the upper pay range and stays there until the end of their career.

In these cases all the teachers are looking to retire at 60 and take all of their pension at that time. This means that any career average pension will be actuarially reduced but this makes the comparison between the choices each member will be given much easier to make.

The three case studies are for;

The end of the final salary scheme on 1 April 2022 presents you with an opportunity to take your final salary pension, continue working AND get paid more.

“Golf cake” by Eldriva is licensed under CC BY-ND 2.0. To view a copy of this license, visit https://creativecommons.org/licenses/by-nd/2.0/?ref=openverse&atype=rich

The final salary scheme can no longer be added to after March 2022 but that doesn’t mean the end…your future salaries will still be used in working out the pension – so make sure you know how to get the most out of that!